Evolution: Of Trees and Fish

Suppose I should not be writing this, because it might draw somebody’s attention to the fact that I’m getting the Frankfurter Rundschau each day without having ordered it or paying for it, and after a while I have gotten quite used to it. I still am not the kind of person to read the entire paper, say during breakfast. But I have come to like leafing through real paper in my lunch break, for example. And I tend to find a couple of articles that catch my attention. Sometimes, they make me want to smash my head on the table (oh, and since we no longer have a glass table, I actually could.) Such was today’s interview with author Nicholas Sparks.

Nicholas Sparks in the “Frankfurter Rundschau”

Why read it, you might say, and I suppose I would not have if I had not caught the word evolution. Somewhere close to a picture of Scarlett Johansson, is what I’m guessing the real reason was. Now, I’m still interested in the whole story of evolution vs. intelligent design and was curious to read what a popular person such as Mr. Sparks, whose voice would possibly have an impact on the opinions of a more general populace, might have to say about it. Let’s start by saying that I was pleased to read that the Christian school he founded does indeed teach the theory of evolution. But oh, for how he continued (my translation):

FR: At your school the theory of evolution is being taught. That is not the case at every Christian school in the United States.

Sparks: The theory of evolution, too, is just a theory that has never been proven. There are a lot of things that aren’t very clear to me. When the first fish leaves the ocean, who does it mate with? And how did trees evolve from that? Or were the trees there, first? I don’t fully understand that. But I still think, the theory of evolution is the best explanation we have to date, and that’s why we teach it at our school.

Is this guy serious?

I mean, I fully appreciate Christians who can be laid back enough to let science do its thing. On the other hand, what he’s doing, though, is acting as if evolution to normal people was just as much a mystery as is the religious mystery that is belief. And then, when with this kind of argumentation the plausibility of the theory of evolution has been discredited enough and everybody’s free to choose what they consider plausible, a literal interpretation of the Bible might seem more plausible than your salmon Al saying to his wife: “You know, Peg, I’ve had it up to here. You can have the ocean, I’ll move on to dry land.” Or how this salmon, after one hell of a leap, finds that there are no girls to mate with on land, and trees grow from all the salmon semen he keeps losing …

Isn’t it obvious that that’s NOT what the theory of evolution claims? Is this the level at which evolution gets discussed? Sure, not everybody can be a rocket scientist, but everybody who ever gets to talk to the media about evolution should understand a few, simple facts about it. And there must be something wrong with schools, if an adult person having seen at least some education, does not. Because, in fact, the fundamental ideas of the theory of evolution are extremely simple and compellingly plausible in their simplicity.

So, the fish leaving the ocean, wasn’t A fish, but generations of fish. They probably had fins different from other fish, to start with, maybe because they had previously undergone a mutation that allowed them to (now I’m making stuff up) dig up food that had hitherto been inaccessible, giving them a competitive edge. And even if there was a first single individual to spend time above the water level, that individual would probably have done that for short periods of time and returned to the sea for mating. It will probably have taken many generations for such animals to be able to spend longer periods of time on dry land or not to have to return to the sea, at all. And the changes to enable that would not have needed to be a matter of course or directed at enabling the conquest of dry land. Fish already able to leave the water for short periods of time might still get offspring incapable of doing that. But their siblings able to would just have a competitive edge, no predators, no competition for food. And every mutation that improves that ability would have increased the advantage. Take a couple of millions of individuals and let probability do its work. I don’t see how anybody can find anything but a compelling plausibility in here. Unless, of course, someday we’ll find a Message in a Bottle by the first lonely fish on dry land.

A visit to the Senckenberg Museum and Evolution

Been to the famous Senckenberg Museum on Sunday and though neither my wife nor my five-year-old daughter had quite enough patience to do it full justice it was very impressive. And even outside the special guided tours for children it was much more suitable for a girl of five than I had feared. 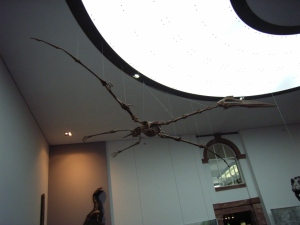 I also learned that the Senckenberg Institute behind the Natural History Museum is not only leading research in its areas but also cares about the reception of science in society at large. Among other things it is involved in the Morphisto initiative. That in turn offers a broad range of publications and services with the ones most fit to be named here being the ones revolving around creationism and intelligent design. Morphisto offers seminars for the education of teachers about strategies of ID and how to deal with them in class. More generally, it offers reading material on the theory of science and epistemology, because it sees the lack of those subjects being taught to young scientiest at university as one cause of their inability to defend science against pseudo-scientific criticism. (Funny to think that I may have done more epistemology as a litererary critic than some scientists, because literary critics have always been accused of unscientific methods.) Most of that meterial is in German, like this enlightening interview but there is also reading material in English, as for example issue #3 of the “Querschnitte” magazine.

Beating Intelligent Design at its own game

At a time I much liked to discuss “Intelligent Design” until I learned that the people supporting it are just not interested in discourse but rather, much like Fox Mulder, want to believe no matter what anybody else might say. You can read all of that here. Be sure to follow the link in the first comment, though, to read some of the actual discussion.

Now, a good friend who knows all about that pointed me to a web site I had not been aware of before, though it is not actually new. It is the web site of the “Church of the Flying Spaghetti Monster“, a parody of “Intelligent Design”. By claiming the right of the church’s doctrine to be taught at school, those folks are exposing how weak the same claim made by the supporters of “Intelligent Design” is, too (unless the Constituion be changed).

This approach is probably far more promising than philosophical discourse alone. As must be expected, the only official responses the original open letter to a Kansas School Board in the process of deciding whether or not to include “Intelligent Design” in the curriculum were sent by members of the board already opposing the inclusion. But there are other notable successes. And the approach is also very entertaining at that. The theory is altogether hilarious, though of course Bobby Henderson is experiencing the same kind of reactions from conservative Christians I have received. But if some people feel threatened by this kind of openess of mind, by this kind of open-ended discourse, then that has nothing to do with the kind of freedom the land of the free is advertising. And if the same people refuse to understand, that it is an even bigger threat to people of different opinions if the former make religion more than a private life matter and try to impose their understanding of what will make one go to Heaven or Hell on the latter, that also reminds me of other countries and/or times, not the land of the free and the 21st century.

I wonder whether I can officially become a pastafarian and send my church taxes over there.